Today, I attended along with my wife the Reader’s day event at Airfield estate held as part of Mountains To Sea DLR Book Festival mountainstosea.ie. It was a great event and an opportunity to meet with a number of talented Irish writers.

successful authors. Tara Flynn   herself is an actress and an author and she moderated the event very well. Claudia Carroll is a Dubliner and has been a successful stage actress. She now writes full-time and her 2013 novel ‘Me and You‘ was shortlisted for the Bord Gais Popular Choice Irish Book Award. She has knocked out a book a year for the last 12 years and did a short reading from her latest novel ‘Our Little Secret’. Kate Beaufoy also began her career as a professional actor before becoming a full time writer. She also has a dozen novels published including t

he number one bestseller ‘The Blue Hour’. She read an excerpt from her latest novel ‘The Gingerbread House’. Both gave insights on what prompted them to become authors and the challenges they faced on their journey. One of the questions was on how much input they provide on the design of their book covers and why it is that covers on the books written by female writers are so different from those of male writers? I found it amazing that both said that they’d almost no say in deciding the book covers and were guided by their publishers. They said that they are primarily writers and have no experience in marketing so they would leave it on publishers to take care of that aspect of book publishing. Both seemed pretty happy with the book covers chosen by their publishers. On the question about the discipline of writing, Kate summed it up very nicely that discipline is nothing but pure hardwork. The last question that Tara had for them was that if they’ve to chose between acting and writing, what would they chose? Both answered that they would chose writing over acting. Kate told the audience that she almost had a fright on every stage opening night. For her, the best part of the acting profession was rehearsal as it was a creative process, the opening stage night was really scary and after that it was plain delivery and did not involve much creativity. Whereas writing is a creative process end to end. Carroll did mention that she still has a big fright when she sends her new book draft to her editor, she said that she is not a mother or a parent but she can imagine that it would feel similar to the moment when a new mother wraps up her baby and hand it over to someone visiting and wait for the feeback if her baby is beautiful or ugly.

After the wonderful talk, there was a tea break and we’re able to chat with both Kate and Carroll and got their latest books signed.

The second event was titled ‘The Writing Life’ and audience were treated to Carmel Harrington, Hazel Gaynor and Fionnuala Kearney discussing the ideas behind their latest book and writing life with RTE’s Evelyn O’Rourke. Carmel Harrington lives with her family in County Wexford. She has won several international awards including Kindle Book of the Year and Romantic ebook of Year. Her latest novel ‘The Things I Should Have Told You’ was nominated for an Irish Book Award. Originally from Yorkshire, Hazel Gaynor now lives in Ireland with her family. Her novels ‘The Girl Who Came Home’ and ‘A Memory of Violets’ achieved New York Times and USA Today bestseller status and her latest novel ‘The Girl from the Savoy’ was nominated for an Irish Book Award. Finnuala Kearney writes about the nuances and subtle layers of humanity relationships, peeling them away to see what’s really going on beneath. ‘The Day I Lost You’ is her second novel; her first was the Top Ten Irish Times bestselling ‘You, Me and Other People’. All the authors read from their latest novels and enlightened the audience with anecdotes from their journey to become successful writers. Carmel and Hazel actually got self published before Harper Collins embraced them and gave them book contracts. Both of them encouraged aspiring writers not to shy away from self publishing on Amazon but to be passionate to explore any avenues to take their stories to the readers. All of them mentioned that writing the book is the easy part but getting it published is more of a combination of right allignment of stars and right agent. The right agent can do wonders but it is hard to secure one and needs a lot of knocking on the doors. It was a treat to listen to their challenges in keeping themselves disciplined while rearing young children. On the question if writing can provide a living, they said it took years before they started to earn a living from writing, for Carmel it took 7 years and 5 novels before she started earning enough to make a living and same struggle was faced by Hazel and Finnuala. 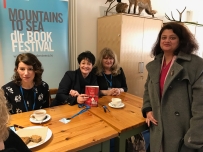 After this really educative discourse, there was a break for lunch and thankfully the kitchen could serve vegetarian sandwiches and soup. We’d our lunch with a group of old ladies from Wexford and had a good chat with them over lunch. Then tea was served with delicious sweet oaties and we could also get hold of Finnuala to get her latest novel signed.

The last event of the day was titled ‘Partners in Crime’ in which crime writers Alex Marwood, Jane Casey and Sam Blake talked about their latest novels and the reasons why women so excel in the crime genre? Declan Burke who himself is a crime writer, journalist and critic moderated the event. Alex Marwood began her career as Fleet Street journalist before turning her hard to the wirting of crime fiction. Her novels ‘The Wicked Girl’ and ‘The Killer Next Door’ have won many awards. Alex herself is a figment of the imagination of the novelist and sometime journalist Serena Mackesy. Sam Blake is a pseudonym for Vanessa Fox O’Loughlin who runs writing.ie, the national writing resources website, as well as a publishing consultancy. In 2016 her first crime novel ‘Little Bones‘ became a Number 1 bestseller and was nominated for an Irish Book Award. Married to a criminal barrister, Dubliner Jane Casey infuses her novels with an unerring authencity. They have been nominated for several awards and in 2015, Jane won both the Mary Higgins Clark Award and Irish Crime Novel of the Year. The first question Declan posed to the crime writers was on their insight on why women excel in crime genre? Jane had a theory that women have a far developed sense of threat and could easily sense threat in every situation and locati

Overall it was a great event and both I and my wife thoroughly enojoyed it.

This entry was posted in Literature and tagged Books, Ireland, M2C2017. Bookmark the permalink.