I had a short break from work recently and decided to make full use of it by exploring a bit more of  beloved Ireland. My wife has long been nudging me to visit Galway which is the third largest city in Ireland and widely regarded as the cultural capital of Ireland. We booked online our train tickets and hotel reservations and set forth to visit Galway.

Galway (Irish: Gaillimh) is the only city in the province of Connacht in Ireland. The city is located on the west coast of Ireland. In Irish, Galway is also called Cathair na Gaillimhe: "City of Galway". The city possibly takes its name from the Gaillimh river (River Corrib) that formed the western boundary of the earliest settlement, which was called Dún Bhun na Gaillimhe, or the fort at the bottom of the Gaillimh. The word Gaillimhmeans "stony" as in "stony river". Another myth is that the daughter of Breasail, a local chieftain drowned in the river, and her name was Gailleamh or Galva, thus the river was given her name. The chieftain was so distraught that he set up camp at the point to mourn her spirit and keep it company. Later, a town sprung up around the point, and was called Gaillimh in her honour. The city also bears the nickname City of the Tribes / Cathair na dTreabh, because fourteen “Tribes” (merchant families) led the city in its Hiberno-Norman period. We boarded the Intercity train from Dublin Heuston Station before noon. The train service is excellent and seats can be reserved on booking. The journey gives an excellent opportunity to see the beautiful Irish country side. On way to Galway the train passes through small Irish towns of Portarlington, Tullamore, Athlone and Athenry and reaches Galway in around 3 hours.

The history of the city is remarkable, Dún Bhun na Gaillimhe (“Fort at the Mouth (bottom) of the Gaillimh”) was constructed in 1124, by the King of Connacht, Tairrdelbach Ua Conchobair (1088–1156). A small settlement eventually grew up around this fort. During the Norman invasion of Connacht in the 1230s, Galway fort was captured by Richard Mor de Burgh, who had led this invasion. As the de Burghs eventually became Gallicised, the merchants of the town – the Tribes of Galway – pushed for greater control over the walled city.

This led to them gaining complete control over the city and the granting of mayoral status by the English crown in December 1484. Galway endured difficult relations with its Irish neighbours. A notice over the west gate of the city, completed in 1562 by Mayor Thomas Óge Martyn, stated “From the Ferocious O’Flahertys may God protect us”. A by-law forbade the native Irish (as opposed to Galway’s Hiberno-Norman citizens) unrestricted access into Galway, saying “neither O’ nor Mac shall strutte nor swagger through the streets of Galway” without permission. During the Middle Ages, Galway was ruled by an oligarchy of fourteen merchant families (12 of Norman origin and 2 of Irish origin). These were the “tribes” of Galway. The city thrived on international trade. In the Middle Ages, it was the principal Irish port for trade with Spain and France. Christopher Columbus is known to have visited Galway, possibly stopping off on a voyage to Iceland or the Faroe Islands. He noted in the margin of one of his books that he had found evidence of land beyond the Atlantic Ocean in or near Galway in 1477. The most famous reminder of those days is ceann an bhalla (the head of the wall), now known as the Spanish Arch, constructed during the mayoralty of Wylliam Martin (1519-20).

During the 16th and 17th centuries Galway remained loyal to the English crown for the most part, even during the Gaelic resurgence, perhaps for reasons of survival, yet by 1642 the city allied itself with the Catholic Confederation of Kilkenny during the Wars of the Three Kingdoms. During the resulting Cromwellian conquest of Ireland Cromwellian forces captured the city after a nine month siege. At the end of the 17th century the city supported the Jacobites in theWilliamite war in Ireland (it supported King James II of England against William of Orange) and was captured by the Williamites after a very short siege not long after the Battle of Aughrim in 1691. The great families of Galway were ruined, and due to the Potato famines of the 1840 -1845 the city declined, and despite enjoying short-term economic revivals in the 18th and 19th centuries, it did not fully recover until the great economic boom of the late twentieth century.

We reached Galway late afternoon and got out of the train at Ceannt Station. The station is located in the heart of the city and is named after Éamonn Ceannt who was an Irish republican born at Ballymoe, County Galway known for his role in the Easter Rising of 1916.

We spent some time at the Eyre Square and then headed to our hotel which was walking distance from the station. We checked in and unpacked our things and rested for a while. As it was already late evening so we decided to visit nearby Galway shopping centre to stock some eatables. Its a big shopping centre and houses all kind of big stores. We stocked ourselves with the food and juices etc. After coming back to our hotel room we planned our trip and decided to visit Aran Islands next morning.

The Aran Islands (Irish: Oileáin Árann, Aran Islands pronunciation: [ˈɪlɑːn ˈɑːrənʲ], or na hÁrainneacha [nə ˈhɑːrənʲəxə], "the Arans") are a group of three islands located at the mouth of Galway Bay, on the west coast of Ireland. The largest island is Inishmore (Irish: Árainn (Mhór) or Inis Mór; Aran Islands pronunciation: [ˈɑːrənʲ woːr] or [ˈɪnɪɕ woːr ˈɑːrənʲ]) the middle and second-largest is Inishmaan (Inis Meáin / Inis Meadhóin; [ˈɪnɪɕ mʲɑːn]), and the smallest and most eastern is Inisheer (Inis Thiar or Inis Oírr / Inis Oirthir; [ˈɪnɪɕ iːr] or [ˈɪnɪɕ siːr]). Irish is the main spoken language on all three islands, and is the language used naming the islands and their villages and town lands.They are famous for their geological formation, historical monuments and their linguistic and cultural heritage.  The Irish( Gaelic) language is still spoken here and in the twenty first century all native born islanders are bilingual in both Irish and English.

The islands have also become synonymous with some of the finest writers and painters of this century, among them the dramatist J.M.Synge and writer Liam O’Flatherty, a native of Inishmore. Artists like Jack B Yeats, Seán Keating, Harry Clarke and many more were frequent visitors.

There are daily ferries that operate to the Islands from Rossaveal in Co Galway. We took a ferry to the biggest of these islands Inis Mór.  The ferry ride is interesting and offers scenic beauty along the way and lasts around an hour. We landed at Aran Islands around noon and were starving so decided to have a quick snack at a local shop. There are enough food joints on the island. After that we took a mini bus to Dún Aonghasa. which is the most famous of several prehistoric forts on the Aran Islands. 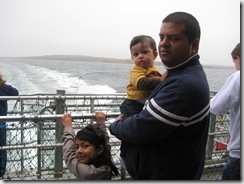 A popular tourist attraction, Dún Aonghasa is an important archaeological site that also offers a spectacular view. It is not known when Dún Aonghasa was built, though it is now thought to date from the Iron Age. T. F. O’Rahilly surmised that it was built in the second century B.C. by the Builg following the Laginian conquest of Connacht.It was probably originally constructed as a circular ringfort several hundred metres from the coast, its present precarious position being the result of centuries of coastal erosion. Dún Aonghasa has been called "the most magnificent barbaric monument in Europe."  The Proto-Celtic name, meaning "Fort of Aonghas", refers to the pre-Christian god of the same name described in Irish mythology. The fort consists of a series of four concentric walls of dry stone construction, built on a high cliff some one hundred metres above the sea.

To reach the fort there is a tough climb of 20 minutes but once on the top the views are spectacular. There are no railings on the cliffs so it looks quite scary and you need to a keep a distance from the edge of the cliff. We spent around an hour on the top of the cliffs and snapped some beautiful pictures of the majestic cliffs and Atlantic. 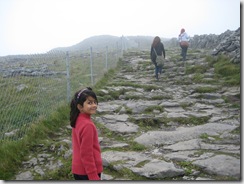 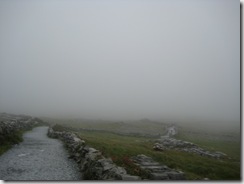 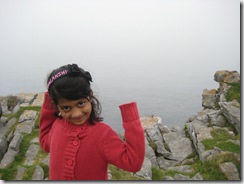 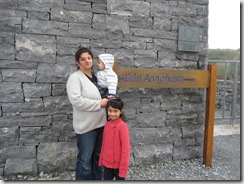 We also visited a number of shops on the island. The islands are famous for the hand knitted woollen sweaters and shawls. We rode back to Galway late evening still marvelling at the beauty of these remote islands.

After reaching Galway we spent some time at Eyre Square where a group of musicians were singing old Irish tunes and then had dinner and headed back to our hotel tired but excited. 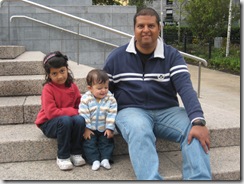 Next morning we decided to visit Galway Bay at the Salthill seaside resort. Salthill’s famous prom is the perfect place to watch the sun go down on Galway Bay.

Galway Bay (Irish: Loch Lurgan or Cuan na Gaillimhe) is a large bay (or sea lough) on the west coast of Ireland, between County Galway in the province of Connacht to the north and the Burren in County Clare in the province of Munster to the south. Galway city is located on the northeast side of the bay. It is about 50 kilometres (30 miles) long and from 10 to 30 kilometres (7 to 20 miles) in breadth.

The beauty of Galway Bay is breathtaking and is widely mentioned in the popular culture. John Lennon‘s song "The Luck of the Irish" contains the following lines:

The Salthill resort also boasts of good recreational facilities for children and adults alike. The National Aquarium Of Ireland is also located at Salthill and is home to the country’s largest display of marine and fresh water life. We spent a couple of hours at the aquarium and saw first hand the marine wealth of Ireland. Next we went to LeisureLand which is a unique entertainment and health and fitness facility.

We also undertook the Galway Hop On – Hop Off tour of Galway and saw the Lynch’s Castle, St. Nicholas’s Church, the Spanish Arch, the Cathedral and the National University of Ireland.

After spending three magical nights at Galway, we headed back to Dublin wondering if we would ever be lucky enough to see again the sun set over Galway Bay.

This entry was posted in Travel and tagged Galway, Ireland. Bookmark the permalink.